The first collage was completed in August 2013, following much coordination by Robert Boucher and group founder Aaron Barstow. Each participant submitted a photo of themselves holding up a letter to collectively spell the campaign hashtag at the time: #GiveYuTheShenmueLicense. Flags would be added to denote each person’s country of origin, highlighting the international nature of the project. 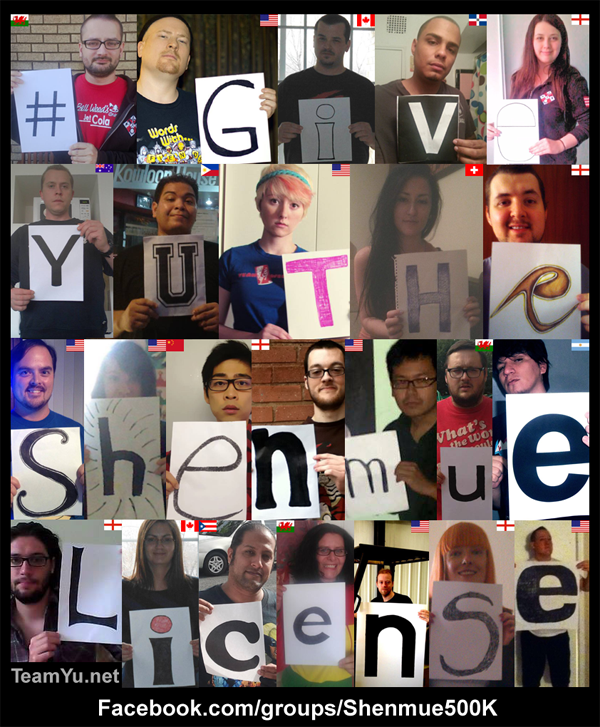 Around the same time this appeal to Sega was published, Jonathan Neasham brought to the community’s attention a survey being conducted by Gio Corsi, PlayStation’s head of Third Party Production. Seizing upon Gio’s invitation to request games that fans would like to see on PlayStation platforms, the campaign began targeting Sony with pleas to revive the Shenmue series. In November of that year, Gio’s colleague Adam Boyes acknowledged that Shenmue had become one of their most popular requests, prompting the group to create a new collage organized by Jonathan and Aaron thanking Sony for listening, and urging them to seal the deal via the campaign’s new hashtag: #SaveShenmue. 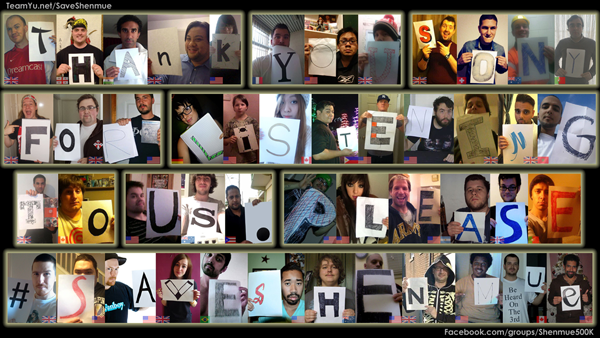 When tweeted the image by Shenmue Dojo, Sony’s head of Worldwide Studios, Shuhei Yoshida, remarked that the collage was “very nice!” Meanwhile, the project was picked up by Kotaku in an article titled “Shenmue Fans Sure Are Crazy,” noting that “fan insanity makes the world go round” and “is a good thing.” Several other news sites in various languages also featured the collage and Yoshida’s response.

During the preparation of this collage for its January 2014 publication, the urge to thank another company arose, as developer Sumo Digital revealed Shenmue’s protagonist Ryo Hazuki as a new downloadable character for Sonic & All-Stars Racing: Transformed, following an officially recognized poll of Sega characters that Ryo had conquered. By swapping out four photos in the Sony collage with four additional members, an extra version was created to express the group’s gratitude to Sumo also. 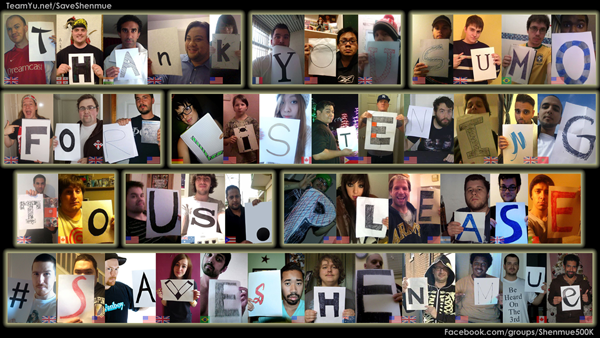 Sumo responded that they “absolutely LOVED it,” and that “it needs printing and putting on our wall for sure!”

The following year, unaware that Shenmue III was just days away from being announced at E3, the group joined forces once more to wish the game’s director Yu Suzuki a happy 57th birthday, using a background image from his famous Out Run arcade game that featured in Shenmue II. 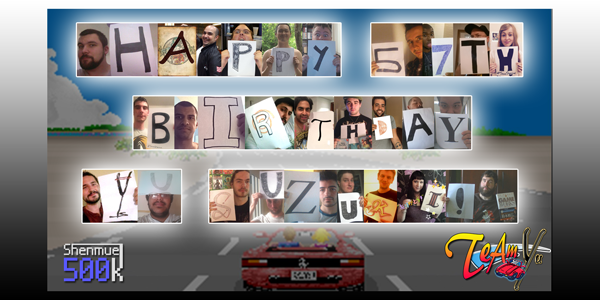 With such a tradition to uphold, you can be sure that Shenmue 500K has more photo collages in its future. This is a community that believes in speaking louder together, combining many voices to make their message heard. The campaign to restore the Shenmue franchise has always relied on cohesive, coordinated contributions from around the world, and this is evident whenever members of this Facebook group stand shoulder to shoulder while miles apart.